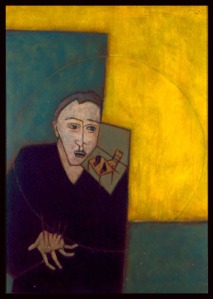 With the show of my new paintings at Perimeter Gallery, Chicago, a scant nine weeks away (opening Friday, November 18th through the end of the year), and since this exhibition will be my tenth at Perimeter, I thought I’d take a look back at my 25 year association with the gallery. So for the next nine weeks I’ll feature one of my favorite paintings from each of those exhibitions.

My first one person exhibition at Perimeter was in 1985. I’d studied painting and sculpture at Purdue University, where the creative emphasis in the painting department was decidedly pointed toward a figurative idiom. I’d moved to Chicago and while still working in a figurative tradition, my work was rapidly moving toward abstraction.  This canvas “In A Green Room” was included in the 1985 Perimeter Gallery exhibition, and hints at my then growing interest in deconstructing pictorial space and the exploration of the psychological / emotional power of non-representational imagery that would become hallmarks of my next body of work.  By late 1986, I’d abandoned the figure.  Next Tuesday, a painting from the 1989 Perimeter Gallery exhibition . . . The segmented canvases.

The new paintings will be off to Chicago in a couple of weeks, and so now it’s putting the finishing touches on the canvasses in progress. . . “Jump over the stop and go house swimming in white”

thanks for reading! Cancel reply